From The Journal Of If Only It Were That Easy: Walking To School Was Not Associated With Lower Weights In 4-7 Year Olds 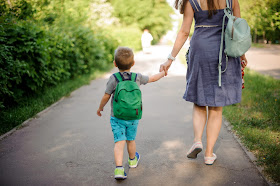 Walking school buses for kids are often promoted on the basis that if more kids were involved with them, their weights, fitness, and maybe even learning would improve.

Wouldn't that be great? After all, it's a relatively inexpensive intervention and one it seems everyone can at least theoretically get behind.

But does it work?

This is definitely not a good news story, nor frankly is it all that surprising, but here it is - recently the MOVI‐KIDS Study set out to explore whether or not there was an association between active transport in 4-7 year olds and their weights, fitness, and cognition.

The study involved 1,159 children in Spain and they were categorized on the basis of whether the active components of their school commutes totalled more or less than 15 minutes and then tested and measured to explore walking to school's possible impact. Heights and weight were measured, a validated cardiorespiratory fitness test was administered, as were multiple batteries of validated cognitive tests. Efforts were also made to control for familial socio-economic status, as well as of course the children's ages and sexes.

As you might have gathered, the walkers were found to be no better off on any studied variable with the authors very plainly concluding,


"Walking to school had no positive impact on adiposity, physical fitness, and cognition in 4‐ to 7‐year‐old children."

I have to say too, I did scratch my head reading the next bit of their conclusion though,


"it would be of interest for future studies to examine the intensity and duration of active commuting to school necessary to provide meaningful benefits for health and cognitive performance."

I can't say I agree with them here as I'm not sure lengthy, intense, daily school commutes for 4 year olds is something we need to explore regardless of their impact on anything. Moreover, I don't need to see "meaningful benefits" to want to continue promoting more movement and play in our children, and if we buy into the need for same, we'll risk the cessation of programs that don't prove themselves to provide perhaps broader reaching or more dramatic outcomes than could ever be fairly expected of them.
Yoni Freedhoff, MD at 5:30 am
‹
›
Home
View web version