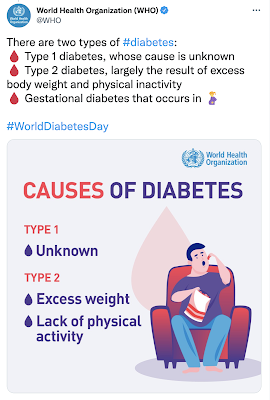 Where to start with this?

First off there are more than 2 types of diabetes (I mean even the tweet lists 3), but really, recognizing World Diabetes Day with an infographic of a person with obesity in bare feet on a Lazy-Boy eating a giant bag of chips?
That's certainly the gluttonous sloth narrative that much of society subscribes to, but the WHO?
And yes, weight, diet, and physical activity correlate with diabetes risk, but for the WHO to dumb things down to people with type 2 diabetes are fat, lazy, gluttons? The mind boggles.
Never mind genetics, social determinants of health (including poverty, education, caregiving requirements, etc), co-morbid medical conditions, and more, the actual World Health Organization on World Diabetes Day, is stating if you have type 2 diabetes, it's your fault.
This of course also ignores the fact that there is just a staggering amount of privilege required to intentionally and permanently prioritize behaviour change around food and fitness in the name of health, and of course denies the reality of the thousands of genes and hormones known to be involved in the regulation of weight and dietary choices.

Perhaps this will serve as an opportunity for the WHO to take a closer look at weight and diabetes bias and stigma and focus some resources to help educate the world on the dangers and risks therein. For over 24 hours, they'd simply added a tweet to their offensive, misguided, and erroneous thread stating they'll take into account the feedback they've received in future messaging, then yesterday afternoon, they finally took it down. Here's hoping we see a thread about implicit and explicit bias from the WHO down the road
[Also, it's that time of year again, and should any of you want to donate to my Movember fundraising (am just over halfway to goal!), here's the link]
Yoni Freedhoff, MD at 5:30 am
‹
›
Home
View web version