All Meat is Good, and Please Eat More of it! 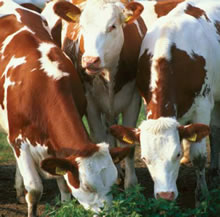 According to the Ontario Cattleman's Association, the average Canadian consumes 51.6lbs of beef per year and Canadian beef production contributes over $20 billion to the Canadian economy annually. Well hold onto your lassos folks, if Health Canada has its way, 2007 may be a banner year!

I'll get into Health Canada's explanation for this increase in a moment, but first let's cover the question, are in fact all meat and meat alternatives equally healthy?

So what are we comparing? We're comparing beef, poultry, fish, seafood, soy, legumes and nuts.

Off the top of your head, do you think it's just as healthy to choose beef over fish or nuts?

I didn't think so.

Strange that Health Canada apparently does despite ample evidence proving that red meat simply is not as healthy a choice as other meat alternatives.

Contrast that with data from fish (also covered in yesterday's post). Remember, using the Nurses Health Study, Dr. Walter Willett and colleagues have calculated that replacing just 5 percent of total calories currently consumed from saturated fat (primary sources in our diets are red meat and dairy) with unsaturated fats (like those found in fish and nuts) would reduce the risk of heart attack or death by about 40 percent. There's also been research showing that substituting fish in the diet specifically for red meat reduces bad cholesterol and that the omega-3 fatty acids in fish lower levels of LDL or bad cholesterol, help to prevent the increase in triglycerides in high carbohydrate based diets, reduce the development of irregular heartbeats (a major cause of sudden cardiac death) and reduce the tendency for clots to form in our arteries.

You should certainly contrast the negative outcomes of high red meat consumption with nuts as well, as several of the largest epidemiological studies of our time, the Adventist Study, the Iowa Women's Health Study and the Nurses' Health Study have shown a 30-50% lower risk of heart attacks or heart disease associated with eating nuts several times per week and that including nuts in our diet helps prevent type 2 diabetes.

Remember too, in terms of reducing saturated fats, there are none in beans and soy and far less in poultry than in beef (especially if you remove the skin of the bird).

Dr Willett, in his review of the draft Food Guide had this to say on Health Canada's Meat and Alternatives recommendations,

"the draft Canadian Guidelines make little distinction between consumption of red meat, beans, fish, and poultry. Although they advocate lean meat, this is only a small fraction of the red meat in the food supply and the guidelines are silent about usual cuts of meat and processed meats, which are a huge part of the North American diet. Thus, the Guidelines seem unbalanced; the evidence would suggest that red meat and particularly processed meats should be limited, and that a combination of fish, poultry, nuts, beans and soy, and occasionally lean meat be the primary protein sources."

So bottom line, does the draft Food Guide differentiate between meat and alternatives. Nope. Buried in the draft Guide is indeed a recommendation that we eat fish once a week and "add variety by choosing alternatives such as eggs, nuts, peanut butter, hummus, seeds and tofu", but on the main pictorial page the wording's different, the category's actually entitled "Meat & Alternatives" certainly highlighting the "Meat". The instructions provided are, "Include a variety of lean meat, poultry, fish, beans and other alternatives", meat again leading off what we're told to choose and then of course there's the picture of the big juicy T bone.

I need to comment here on the T-Bone. It's quite a remarkable picture to represent meat considering the fact that T-bones are certainly NOT lean cuts of meat. It's a downright ridiculous picture when you look underneath it and see that Health Canada suggests a serving is 50grams because the average T-bone weighs roughly a pound and therefore would make up 11 Food Guide servings.

I won't bother getting into the picture of the chicken drumstick with the skin left on.

And what's with the increased number of servings? Health Canada explains it by pointing out that they've reduced the serving size and therefore the increased number of servings, by weight, actually ends up reflecting a smaller total amount. They say this despite the fact that there is no research that would suggest we're eating too little in the way of meat, and ample evidence that would suggest we're eating too much.They also say this despite their own research that shows most Canadians don't know what a serving is and generally relate the amount they put on their plates to be a serving. Put meat on your plate four times a day and there's four servings.

So if Health Canada wants us to eat smaller servings, do they instruct us to weigh and measure our food? Nope. Instead they've instructed us to use half the size of our palms to measure out meat portions. Guess what, palms vary pretty dramatically in size. I'm a pretty average sized guy and when I estimated the weight of my palm in ground beef I ended up with twice as much meat as what Health Canada called a serving. When my wife tried this, and she has incredibly small hands, even her portion was 10% greater than what Health Canada was recommending. Also there's the fact that as far as I'm aware, butchers don't sell half-palm sized cuts of meat.

At the end of the day, there's no doubt that the evidence would support recommending we minimize red meat consumption and increase fish and alternatives' consumption, though I suppose a $20 billion dollar Canadian beef industry would want us to think otherwise.