The Food at the Ottawa Heart Institute 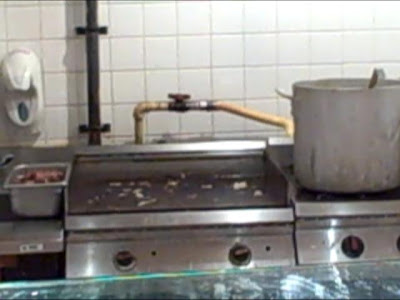 My regular readers will remember a ways back I blogged about the QEII hospital in Halifax where a cardiology resident wrote an opinion piece about the state of the cafeteria's food there.

Well, I've decided to take a tour of our local hospitals and last week I took advantage of being at the Ottawa Heart Institute (OHI) giving a talk and I brought my new toy - it's a Flip video camera that's roughly the size of a cell phone that dead easy to use and at least a little bit inconspicuous.

My goal was to record the dietary fare at the OHI. The picture of the frying bacon on the grill above in the Heart Institute's Cafeteria (named Tickers) sums things up fairly well, but I'll run it down for you a bit further.

One of the first things you see when you walk through the Heart Institute's main doors is a Tim Horton's replete with its many varieties of deep fried donuts. More interesting are their non-donut options - here's a smattering along with some of their nutritional information:

Turkey Bacon Club - 440 calories, only 8 grams of fat and a blood pressure bursting 1730mg of sodium (that's more than Blood Pressure Canada recommends in an entire day for a healthy individual let alone a patient at the Heart Institute)

In fact if you were a patient or a visitor at the OHI and you didn't particularly like the cafeteria or the hospital's food and instead decided to eat at Tim Horton's for breakfast, lunch and dinner and you chose the options with the lowest amount of sodium, you'd still almost certainly consume over 3,000mg of sodium. If you weren't being careful it'd be no trouble at all to clear 4,000mg.

Ok, so maybe an argument could be made that Tim Horton's is just there for snacking rather than meals and that instead OHI's Tickers has the healthy fare.

If only that were true.

Eat at Tickers too often and heaven help your tickers. While there may be a healthy option here or there, the bulk of the food served at Tickers is junk food. Burgers, fries, pop, ice cream, pastries etc., and I could not find a nutritional breakdown anywhere. That's really a shame given that many of the folks eating at Tickers will be patients and their relatives, all of whom clearly have risk factors for heart disease and therefore don't need to incur any additional dietary peril - I wonder if they'd appreciate a means with which to evaluate their choices?

Certainly the hour long lecture entitled "Salt and Hypertension" available on your website suggests you do.

Funny, I didn't see a slide that suggesting folks reduce their dietary salt intake by avoiding the food sold at the Heart Institute!

Below's a choppy video tape I took at the OHI. Hopefully I'll get more skilled with the equipment as this series progresses.

(Future editions of this series will cover the Ottawa Civic, the Ottawa General, the Queensway Carleton, the Royal Ottawa and the Children's Hospital of Eastern Ontario.)