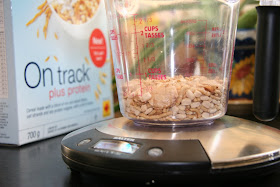 As some of you may know, my wonderful wife is pregnant with our third child and for some reason she's been much hungrier this time around. Consequently she's been focusing on eating frequently and including protein with every meal and snack.

A few weeks ago she came home with a bunch of high protein cereals. The one she was most excited about was the President's Choice Blue Menu On Track Plus Protein. She was excited because its nutrition facts panel reported that she'd get 13 grams of protein and 210 calories in 1.25 cups of the stuff. That excited her because it was a lot of protein and more importantly compared with the other high protein cereals, it was a large volume of cereal.

It actually sounded too good to be true.

Well, like most things that sound too good to be true, it's not.

My wife decided to weigh the cereal as its nutrition facts panel reported that the 1.25 cups of cereal ought to weigh 54grams.

That means that when measured by volume President's Choice Blue Menu On Track Plus Protein provides 40% more calories than reported on its label.

That means if you decided to have the box's recommended 1.25 cup serving every day for breakfast in a year you'd consume 30,000 more calories than you bargained for.

Given that the cereal is being marketed to folks as assisting in "maintaining a health body weight" and keeping them, "On Track" that's an incredibly off-track deception.

Shame on you President's Choice.

UPDATE 17/3/2009: Just heard back from President's Choice who report that indeed there was a labeling error that they are trying to remedy. They report 54grams being 7/8s of a cup and while not quite the 3/4 we measured, certainly close enough for me not to quibble.
Yoni Freedhoff, MD at 5:30 am
‹
›
Home
View web version