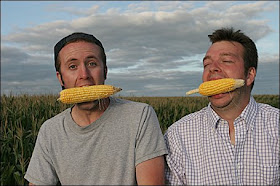 I watched the movie King Corn the other day.

It's a documentary on the corn industry in the States. The film follows two recent college graduates who decide to grow an acre of corn and then follow it through the food supply.

The movie's a fascinating look at a crop that's heavily subsidized and one that's responsible for one of the most celebrated nutritional boogey-men of the day - high fructose corn syrup (HFCS).

The movie's both entertaining and informative and I highly recommend it.

Some interesting facts I gleaned from the movie?

"We subsidize the Happy meals, not the healthy ones"