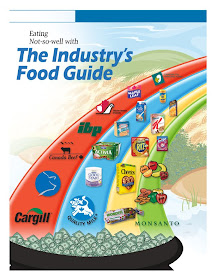 Given it's only 3 years post the release of Canada's Food Guide, one might imagine that the recommendations ought to be pretty similar as not too much has changed in the evidence-based nutrition landscape.

Of course that assumes that the 2007 Food Guide is evidence-based (a bad assumption).

A quick peek at the Executive Summary of the Report reveals their calls to action. Let's take a peek at them and see if they're reflected in Canada's 2007 Food Guide:

1. Reduce the incidence and prevalence of overweight and obesity of the US population by reducing overall calorie intake.

Canada's Food Guide? Puts zero emphasis on legumes, nuts or seeds and happily recommends that half of our grain be refined.

3. Increase the intake of seafood and fat-free and low-fat milk and milk products and consume only moderate amounts of lean meats, poultry, and eggs.

Canada's Food Guide? Does recommend we increase the amount of seafood we consume but puts no limits or cautions on meat consumption. Includes whole milk, pudding and chocolate milk in their online guidance meant to steer Canadians to appropriate dietary choices.

Canada's Food Guide? Has a blanket recommendation to reduce sugary foods and fats but provides very little guidance on salt and as mentioned, recommends half the grains we consume be refined.

And yet Canada's Food Guide is in and of itself obesogenic (my prior posts on this matter here, here and here).

Now of course these are just the recommendations of the advisory committee and it remains to be seen how these calls to action are actually incorporated into the final guidelines but one thing's for certain, Canada's Food Guide does not reflect our current understanding of the impact of nutrition on chronic disease and for those in the nutritional know, it is a national embarrassment.
Yoni Freedhoff, MD at 5:30 am
‹
›
Home
View web version