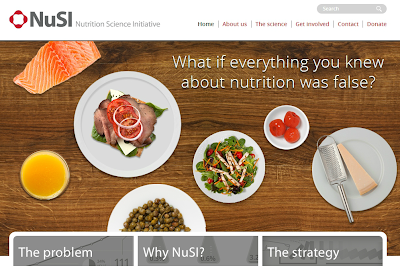 Because that's exactly what it appears it's designed to do.

Taubes lays out the experiment in his recent NuSi promoting Scientific American piece. He's going to take 16 individuals with overweight and obesity and house them in a research facility so as to ensure careful and total control over their dietary intake. Next he'll feed them a diet that's 50% carbs, 35% fat and 15% protein. He'll then tweak calorie intake until subjects are neither gaining or losing weight. Once weight stable he's going to pull the carbs out from under their feet and drop the 50% carbs in their diets down to 5% but will do so while keeping calories entirely stable.

And here's Taubes' description of the implications of his study design,


"In this case, if fat accumulation is primarily driven by an energy imbalance, these subjects should neither lose nor gain weight because they will be eating precisely as many calories as they are expending. Such a result would support the conventional wisdom—that a calorie is a calorie whether it comes from fat, carbohydrate or protein. If, on the other hand, the macronutrient composition affects fat accumulation, then these subjects should lose both weight and fat on the carbohydrate-restricted regime and their energy expenditure should increase, supporting the idea that a calorie of carbohydrate is more fattening than one from protein or fat, presumably because of the effect on insulin."

I'll get to why in just a second, but I predict they'll all lose between 6-20 pounds in the first 2 weeks of a diet consisting of 5% carbs following a step down from one that consisted of 50% despite the fact calories will remain constant. I also imagine that the experiment won't last much longer than the time it'll take for them to lose that weight as most folks don't have the time/luxury of spending months and months in a metabolic ward.

So why will they lose so much weight while calories are kept stable? Won't that indeed confirm Taubes' hypothesis is right on the money?

Not exactly. No doubt some of their losses may well be consequent to the fact that there are differences in what I'll broadly describe as the bioavailable calories of different foods and macronutrients - and so indeed, Taubes may well demonstrate that calories in and calories out is a far from perfect equation (though that's not exactly news), but the bulk of their losses will be consequent to the fact that during the low-carb phase these individuals will burn through their bodies' natural carb stores, their glycogen, and in so doing they'll liberate all the water stored with it.

Depending on your source and each body's level of training, by weight glycogen is responsible for 1-4% of muscle weight in an individual with fully stocked stores (as the study subjects' here will given their 50% carb loading diets). Every gram of glycogen in turn also carries with it near 3 grams of water and if you lose the glycogen, you'll lose the water too. Folks with obesity carry a great deal of muscle. According to friend and author Brad Pilon, in his work he'd found those with obesity to sometimes have a full standard deviation more lean mass than he'd have predicted and regularly carried with them 100lbs of muscle (especially taller men). That's consistent with my findings here in my office and also passes McMaster Professor Stuart Phillips' sniff test. Consequently this study subjects' muscles' glycogen stores will weigh somewhere in the neighbourhood of 1-4lbs. Add in the water associated with those pounds and now we're talking 4-16lbs that will be rapidly mobilized when carbs are cut (and even more if the deck is super-stacked by only including men with class II or higher levels of obesity). They'll also have liver glycogen stores of between 50-150 grams which when lost along with associated water, will drop them an additional 0.5-1.25lbs. Couple those losses with the tiny bit extra you might expect consequent to the differing thermic effects of food and I'd bet, in total, losses will range between 6-20lbs despite the fact total calories won't have changed.

I'd bet too that there's a great chance this will be a crossover study (or one will soon follow) where Taubes will show us his subjects' massive and total regains when carbs are reintroduced (and glycogen and water reaccumulate) as that will certainly appear to support his hypothesis. Subjects may even gain back more as some papers suggest glycogen starved muscles are able to acutely store larger amounts of glycogen following a carb reintroduction.

I imagine glycogen will be mentioned in the study's discussion section, how could it not be, but what do you think the headlines are going to focus on when the findings that keeping calories constant in a metabolic ward setting but dropping carbs led to massive weight loss are published? Do you think the press will appreciate the result is entirely expected and hence perhaps not even newsworthy?

If simply cutting carbs was a sustainable, enjoyable, and consequently realistic, strategy for the masses, the world would already be slim as it's been down the low-carb road plenty of times before, and I'm unclear on how this particular study is going to do anything other than confirm something we already know to be true.

Lastly, I must as always point out, I'm not anti-low carb. I don't think low-carb is unsafe. I do think low-carb helps many with weight loss. And I do think society's increased reliance on heavily processed carbs has been a contributor to its growing weight. But I also think that low-carb diets have proven themselves to be difficult for many to sustain and consequently that low-carb diets are far from a realistically applicable global panacea for the problem at hand.

Taubes has rightly raged against the damage done by the oversimplified application of calories-in-calories-out, which is why I find it so confusing that he seems to be championing the equally oversimplified message of, to paraphrase, it's the carbs stupid.

[UPDATE: A source who wishes to remain anonymous has informed me the study's formal primary endpoint will be energy expenditure and the secondary endpoint changes in fat mass.]
Yoni Freedhoff, MD at 5:30 am
‹
›
Home
View web version