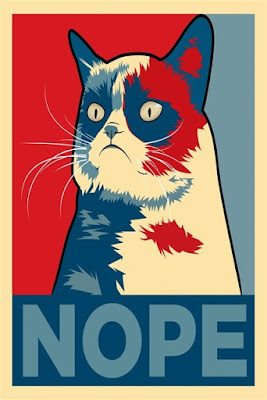 I heard it most recently from a teacher explaining why it's no big deal that she gave her 8 and 12 year old students Smarties (Canadian M&Ms), Lucky Charms Bars, Smart Food, Goldfish Crackers and Freezies for various reasons including most recently, writing a standardized test.

Both suggest that the indulgence is small, therefore the questionable offering is no biggie.

And for individuals, it's true. I don't think that there should be any forbidden foods. We should all be consuming the smallest amount of indulgences that we need to like our lives (my four food kryptonites are Sour Patch Kids, Ruffles, dark chocolate Reese's Peanut Butter Cups, and scotch).

But it's not true when referring to teachers choosing to give Smarties to 8 year olds because they were writing a standardized test.

Because firstly, it's not just one, and consequently it's not a moderate amount, because as anyone with children today knows, it's "just one" for other people giving kids junk food virtually every day, and some times multiple times a day.

And yes, while I have zero issue with children eating Smarties (mine just came back from Manhattan where one of their favourite stores was the M&Ms store), teachers teaching their 8 year old students that there's no occasion or effort too small to not warrant candy or junk food does not fit into my definition of a message that's healthy even in moderation.

With very rare exceptions (like another kid's birthday party, or Halloween), parents, and parents alone, should be the arbiters of how much candy or junk food their 8 year olds are offered, not teachers, who instead could/should serve as role models as to how to reward and inspire without messages like the one that same teacher who wanted me to know it was ok because "everything in moderation" posted to Twitter,

Not an end of test dance party? An extra period of recess? Painting a celebratory class mural?

Though it's harsher than might be fair, and clearly written in exasperation, there was a comment left on my Facebook page by Robin Nelson VanDyke that I have a difficult time disagreeing with,

Honestly, and as I've been saying over and over again, it's not that teachers don't care, they do, it's that junk food for everything is so entrenched and normalized that when challenged people get defensive rather than reflective.

[If you're a teacher looking for non-junk food ideas, here's a great list and backgrounder to peek at]
Yoni Freedhoff, MD at 5:30 am
‹
›
Home
View web version