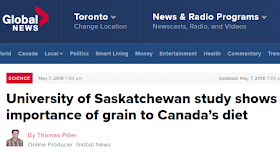 So I saw this story published by Global News. It's about grain consumption in Canada and the headline sure is strong,

When I clicked through I read about researchers who by way of a cluster analysis of Canadians' grain consumption patterns, concluded that 80% of Canadians aren't eating enough grains and that as a consequence, they're apparently at risk of deficiencies in folic acid, some B vitamins and iron.

Oh, I also learned that

and that refined grains are,

"research suggests eliminating grain foods from diets is not associated with the body mass index (BMI)."

When I compared the two, it turns out that the Global News story was 49.5% identical to the Healthy Grains Institute press release. 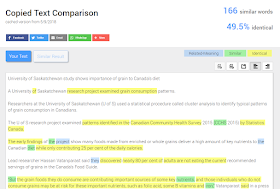 Personally, I don't think the information in the press release warranted any news coverage, but if you're going to actually cover it, at the very least it'd be useful (and I think expected) to see:Small wonder why people are confused about nutrition if food industry press releases about unpublished studies are copied and repackaged as news.
Yoni Freedhoff, MD at 5:30 am
‹
›
Home
View web version