Parental "No" Files: The But It's Just One Gingerbread Man Argument 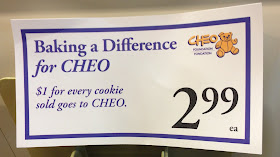 So on Sunday I went to our local supermarket with my 5 year old.

When we got to the checkout aisle the teenage cashier asked me if I wanted to buy my daughter a giant gingerbread man for just $2.99 so that $1 could go to help support the Children's Hospital of Eastern Ontario's (CHEO) Foundation.

Exercising my right as a parent, I said, "No thank you".

You know I'd have happily spent $1 on a sticker for CHEO. Heck, I'd have spent $1 just for CHEO by means of an addition to my bill. But spending $3 to give $1 to CHEO so my child can be fed a bunch of pulverized white flour held together by 5 teaspoons of sugar and emotionally tying together for her the purchase and consumption of junk food and doing a good deed? No thank you.

And I know too there are those of you out there who think I'm just crazy. That, "it's just a gingerbread cookie and it's Christmas time!" - but that's not a whole picture argument. There no longer seems to be any cause, holiday, sporting event, or gathering that doesn't have someone enticing my children with junk food and sugar. It honestly seems as if not a single day goes by where my kids aren't offered junk food by someone other than their parents. It's a never ending parade of garbage and we've normalized it to the degree that to question this junk food cavalcade is deemed more surprising, upsetting and offensive than the cavalcade itself. And each and every time and instance has someone rationalizing the practice with the, "but it's just one (insert junkfood here)" argument.

It's a hugely shortsighted argument.

Somehow I'd have hoped that of all folks out there, the good people over at CHEO would want to decrease the normalization and constant provision of junk food to our children, let alone be used as a means to make the sale itself.
Yoni Freedhoff, MD at 5:30 am
‹
›
Home
View web version