Is it Really "Scientifically Impossible" to Keep Your Weight Off? 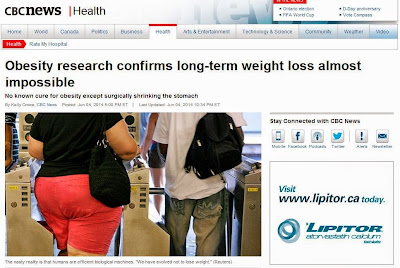 I've had many requests to comment on the recent study and reports that permanent weight loss is impossible. The stories remind me of a piece from the New York Times a few years ago that also said we're all doomed to regain our lost weights and I'll repost my blog on that below, but briefly, if a meta-analysis of randomized trials of weight management fails to show long term success with weight management does it mean the people in the included trials failed to maintain their interventions, or does it mean that the interventions were too crappy to be sustainable in the first place? Having read what feels like hundreds of weight loss studies my bet is definitely the latter and therefore learning that poorly designed, or overly strict, or poorly supported interventions don't help people in the long run really isn't all that surprising.

Here's my lengthier discussion in that repost: 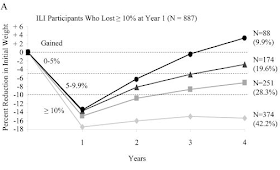 If you haven't read Tara Parker Pope's Fat Trap in the New York Times, her premise is pretty straightforward - permanent weight loss is virtually impossible, and for those who succeed it requires near superhuman willpower.

According to Tara, the body adapts to weight loss in multiple ways that make weight gain easier, and it's basically a full time job to keep it off from a vigilance perspective.

I think Tara's article's great and highlights two tremendously important points. Firstly, that there's way more to all of this than simply pushing away from the table, as the body keeps tucking people right back in. Secondly, that society's approach and attitude towards weight management is just plain broken - and I suppose it's here where Tara and I effectively diverge.

Tara talks of extremely restrictive diets as if they're what are required to lose. I couldn't disagree more (I'll come back to this).  Then she discusses the ongoing and incredible vigilance of successful losers, quoting Yale's Kelly Brownell as stating,


"Years later they are paying attention to every calorie, spending an hour a day on exercise. They never don’t think about their weight."

That does indeed sound rather severe, and she definitely writes about it with the spin of negativity.

What do I think?  I think negative depends on approach and attitude.  For instance where Tara might use the word vigilance, I'd use the word thoughtfulness and that being aware of every calorie doesn't mean you're not eating indulgent ones.

Tara picture though is definitely the incredibly strict life that typifies society's eye view of "dieting".  But even if severity's what's required, why can't people just stay hard core?  Superficially you might think people would in fact be able to remain hard core, because people really, really, really want to keep the weight off and I imagine this confuses many folks, including Tara.

How badly do people want this?  In a now classic study, Rand and MacGregor revealed that formerly obese, bariatric surgical patients would rather be of normal weight and deaf, dyslexic, diabetic, legally blind, have very bad acne, have heart disease or one leg amputated, than return to being severely obese. If you felt that way about something, for whatever the reason, don't you think you'd do whatever it took to keep that weight off, even if it were a hardship?

So why do people gain it back if it's so important to them? If they'd rather be blind or have a leg amputated, why can't they just keep up with their weight management efforts? Is it because as Tara describes their bodies work against them? Certainly in part, but I think the bigger reason is because they've likely chosen inane methods of loss and maintenance - like those described by Tara. To lose their weight they've gone on highly restrictive diets, they're denying themselves the ability to use food for comfort or celebration, they're regularly white-knuckling through hunger and cravings, they've set ridiculous Boston Marathon style goals for their losses, and they'll often possess highly traumatic all-or-nothing attitudes towards their efforts. In short? They've chosen suffering as their weight management modality.

I guess what I'm getting at is that there is zero debate about the fact that weight management, whether it's losing or just not gaining, does require effort. What I'm positing here is that if your effort is personally perceived as a misery, given human nature, eventually you'll fail, not because you're weak willed, but rather because you're human, coupled with the fact that the world we live in is now a Willy Wonkian treasure trove of calories and dietary pleasure.  This calorically non-intuitive wonderland is also why without ongoing thoughtfulness in terms of choices, lost weight comes back even for those who do it smart.

My weight management philosophy has always been rather straightforward - whatever you choose to do to lose your weight, you need to keep doing to keep it off, and therefore choosing a weight loss modality you don't enjoy is just a recipe for regain.

So is there one right way to do this?  I don't think so.  As far as weight loss and maintenance go there are many different strokes for many different folks, but there is one essential commonality for those who succeed where others fail - if you're going to keep it off you've got to like how you've lost it enough to keep doing it.

Now back to Tara's premise that almost no one keeps it off.

That graph up above?

It's from a recently published study of something called the Look AHEAD trial where Tom Wadden and colleagues studied those factors associated with long term weight loss success. The factors? Paying attention to intake, exercising, and applying the education they received from their expert research team. And would you take a look at that graph!  By year 4, of the folks who'd lost more than 10% of their weight in the first year, some did indeed gain it back, but 42.2% kept off nearly 18% of their presenting weight for the full 4 years! In fact they kept off virtually all of their year one losses. Moreover, looking at all comers of the trial and not just the folks who lost a pile in year one, nearly 25% of all participants maintained a 4 year loss greater than 10% of their initial weight.

That's sure a far cry from no one.  In fact if those results came from a pill some pharma company would be making billions of dollars.

So it is indeed doable, but ultimately weight loss and maintenance require lifelong effort, therefore if you don't like the effort required, you're not going to keep it up and your weight's going to return.

Somehow I wouldn't have thought an article that reinforces the fact that if you don't like the life you're living, you're not going to keep living that way would grace the pages of the New York Times.
Yoni Freedhoff, MD at 7:50 am
‹
›
Home
View web version