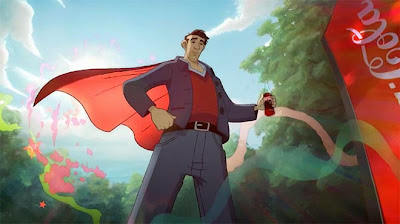 And really, why wouldn't Coca-Cola tap a 6 year old given that the target market for cartoons are in fact children.

"Sure, occasionally one (dog) dials 911 or wins America’s Got Talent, but for the most part, dogs are idiots. That’s why we love them,” explained Todd. “They have the curious, imaginative minds of a six year old–specifically mine–who thinks every stick is excalibur, every bit of string is a lightning whip,” added Kylie. “Dogs don’t see a heap of two-week old laundry; they see a castle ready to be defended, then napped in. Where we see a cumbersome vacuum cleaner, they see an alien robot loudly singing its home planet’s anthem. At least that’s what my six year old told me.”

For their part, Coca-Cola regularly and staunchly denies targeting children with advertising.

So have a peek at the screencap above, and watch the ad below, and then you tell me, what demographic do you think this ad is designed to appeal to most?