School Vending Machines Raise Very Little Money So I Ask A Principal, "Why Keep Them?" 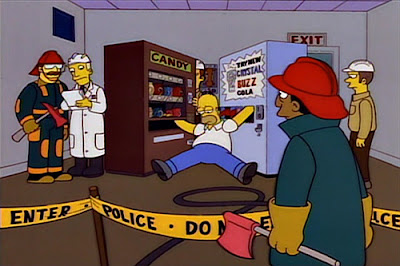 During my annual winter blogging break, I'll be posting some of my favourites from back in 2013.

School vending machines peddle junk. Whether it's health-washed junk (which I've reported before is likely worse for kids given their health halos misinforms children about nutrition), or true junk, when I was a kid, there certainly weren't any school vending machines, there were just water fountains.

So I wondered aloud on Twitter one day just how lucrative vending contracts are for schools. One kind principal reached out and the answers she provided surprised me some. Sounds like at least here in Canada, schools only raise a few thousand dollars a year by selling nutritional chaff to their students (they used to make far more when sugared soda was still sellable as back then there were more sales and the big soda makers also provided in-kind donations).

Now maybe I live in a dream world, but I would have thought a few thousand dollars return would either a) Not be worth it given what the vending machines are selling, or b) Be able to be raised in a non-harmful way.

I still do think both of those thoughts hold true, but when I put it to the principal and asked her why keep them, she wrote me what I thought was a very thoughtful and practical piece and I asked her if I could share it with you (I've changed identifiers so she doesn't land in any hot water) - it speaks to the fact that there are far bigger issues for our schools to deal with and that it might not be that simple to fix them.

To be honest with you, vending machines haven't really been on my radar until June. The Super met with us in April, and he mentioned that he and the District Education Council were taking a closer look at school compliance with vending policy. The council member who sits on my local parent committee is passionate about healthy eating, so we are certainly going to be under the microscope.

My view regarding the absence of machines in my school is similar to my battle with drugs. As soon as you suspend the drug king pin there are five others waiting to take his/her place. It's a constant Game of Thrones. I see a similar path for vending. They will take off to the nearby convenience stores. Why pay $1.10 for 10 small carrot sticks and dip at the cafeteria when you can get chips at the pizza place 50 ft. from the school property line? I find that kids that really care about what they're eating are bringing bagged lunches. The rest are up for the quick fix. Tim Hortons, McDonald's, Pizza Pizza, St. Hubert's, and China Wok are all within a 5-minute walk from us.

I am in total agreement with you regarding water fountains, but these are viewed as unsanitary by many of the kids. Springfield water is very good as we are on a well system. I do see kids using the fountains. I'll be the first to admit that they are not aesthetically pleasing- they're not as sexy as the machine that picks up the drink and beams it to a vacuumed tube. But they certainly work. Don't forget- some schools are almost 100 years old, with old pipes and hardware. Springfield Elementary was built in 1930. My school had a flood and was repaired in 1986. You push the button, let the water run for a while, then get a drink. It takes a while for the cold water to run through the pipes to the actual fountain. I'm not making excuses by any means, just trying to give you the picture. This is not lost on the teenagers.

We have a very successful hot lunch program on Thursdays. We were so proud of ourselves, we thought we would create a free breakfast program at school. We had a community supermarket partner step up to help us out. We offered a variety of healthy choices, and guess what? The kids didn't eat it. It was open to all 480 students and nobody came. I bet if we had offered Froot Loops and Eggos we would have had a full house. It shut down after a five-week attempt. We were shocked. Let me get this straight, "You would rather pay at the cafeteria than eat for free down here in the culinary tech room?" Unreal. I have been teaching for 15 years- I can count the number of times I have eaten at the cafeteria on one hand. I kid you not. I dry heave just thinking about it.

From my point of view, the money from vending isn't really on my radar. That money would barely cover my biology/physics/chemistry budget for the year. And the gym spends that amount in consumables (shuttle cocks, rackets, balls) yearly. The money comes in, but it's in such small increments that it's just thrown into the kitty.

I don't go the vending/back machine route for disposable income. I'm sure some might, but we certainly don't talk about it in admin. meetings, and we talk about just about everything. Get rid of them? I guess we could, but I don't see this as the answer. Many schools are community partners, with a variety of clubs/organizations using the facitlities in the evenings. The vending offers them a last minute snack or drink, if needed. I'm guilty of using the one at the gym when I have forgotten my bottle for spin class. Those using the gym at school may find themselves in the same boat. I just don't want you to have the perception that we have vending for profit- the profits are not lucrative. We have them because we have them- they've always been there, I guess.

On the flip side, you would be hard pressed to find a teacher that doesn't have a file cabinet full of snacks for kids who have forgotten their lunch.

The quality of these snacks? Well, that's classified information...:)