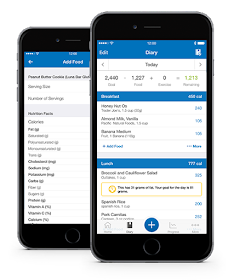 First, let me get this out of the way.

The currency of weight is calories. True, not all calories have the same impact on health or satiety, and also true, people aren't walking math formulas, but that doesn't change the fact that you need a surplus of calories to gain and a deficit to lose, and that the false dichotomy suggesting it's only worth caring about either quality or quantity of calories is just plain dumb.

But the story here isn't about that. The story here stems from the fact that my office is currently in the development stage of a mobile app which in turn will include a food diary.

Right now we're trying to figure out which calorie and food database to licence, and as part of that process one of our office's terrific RDs, Lauren Lejasisaks, chose 4 online recipes and crunched numbers using myfitnesspal, calorieking, and another third party database that we're considering licensing.

Turns out, they're all different. And not by small margins! The very same ingredients entered into those 3 different databases yielded results that differed by as much as 40%.

As to which is right?

I have no idea.

And it probably doesn't matter as much as you might think.

Though there's certainly value in having an inkling of where you might be at calorie wise (or carb wise if you're tracking that instead), probably the bigger value of record keeping is in the context of its service as a conscious reminder of the behaviours that you're trying to change. And if you're keeping a food diary regularly, you'll be reminding yourself multiple times per day, and so long as you don't use your food diary as a negative, blunt, tool of judgement, those reminders will help you to make more informed and thoughtful dietary decisions.
Yoni Freedhoff, MD at 5:30 am
‹
›
Home
View web version