Once Again I'll Ask, Where The Hell Is Canada's New Food Guide? 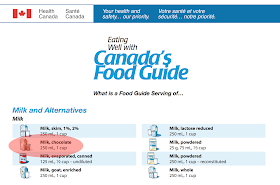 This post was first published back in June. Since then, still no Food Guide, as well as the real possibility that not releasing the Guide influenced the New Brunswick provincial election, and just this past week, an incredible dive into juice, food politics, and our as yet unpublished guide. I really can't wrap my head around why it's not out yet beyond politics. That's not something this country should be proud of.

In case you missed the news, New Brunswick recently banned the sale of chocolate milk and juice in their schools.

It's a welcome move, and one that will be undoubtedly be adopted nation wide following the long delayed publication of Canada's next Food Guide.

Canada's Food Guide, last published in 2007, inexplicably and explicitly, reports that chocolate milk is a healthy dairy choice (that it also suggests dairy is such a magical food that it requires it's own Food Guide category is a whole other kettle of inexplicability). Or maybe it isn't that inexplicable in that on the then Food Guide's 12 member advisory committee was Sydney Massey, the Nutrition Education Manager and Spokesperson for the BC Dairy Foundation, where their homepage at the time featured the campaign,


"Don't tell Mom, but Chocolate Milk is good for you"

The next one, won't.

I know this in part because back in 2014, Dr. Hasan Hutchinson, the Director General of Health Canada's Office of Nutrition Policy and Promotion (the office in charge of the Food Guide), agreed with me during our then debate, that chocolate milk shouldn't be deemed a health food by our Food Guide,


"One thing we're doing right now is doing a reassessment of all of those things and certainly me personally, I agree with Yoni that it (chocolate milk) should not be there either"

And in May 2015 he was quoted by the CMAJ on juice stating,


"You won’t be seeing that anymore … and there’ll be a fair number of new materials coming out in the next few months."

I also know this because even McDonald's appreciates that chocolate milk, with more calories and sugar drop per drop than Coca-Cola, shouldn't be routinely offered to children.

So here's my first question.

If, in 2007, Canada's Food Guide had explained that chocolate milk is to milk what apple pie is to apples, and that it should be considered a treat rather than a health food, and that no, juice is not the same as fruit, do you think we'd be seeing these actual responses and comments posted on Facebook and on the CBC article in response to the news out of New Brunswick?

"It is crazy and stupid. especially since the school officials are comparing the natural sugars found In the cocoa that makes it chocolate to the artificially added high fructose corn syrup used to sweeten coca cola."

"Ugh get a life people! Chocolate milk is some parents only option to get their kids to drink milk. And as far as juices they sell apple and orange at school so are they now telling us apple and OJ juices are bad??"

"I agree, pop and juice fine. Chocolate milk is filled with nutrients."

Because the thing is, though no one shops with Canada's Food Guide in hand, its recommendations do permeate national consciousness. And more to the point of this post, they inform school food policies. Once the new Food Guide is published, and assuming it explicitly recommends limiting sugar sweetened beverages and juice (and it will), all provinces will undoubtedly soon fall in line with New Brunswick (unless of course the Conservatives, as they promised prior to their election, repeal the ban).

And here's the most pertinent question. It's been 5 years since Dr. Hutchinson agreed chocolate milk should be off the Food Guide's menu, and 3.5 years since he went on record stating that juice's days are also numbered, so how is it possible that we're still waiting?
Yoni Freedhoff, MD at 5:30 am
‹
›
Home
View web version