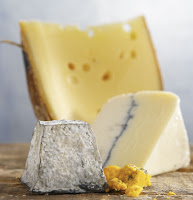 Rosie Schwartz, nutritional columnist for the National Post, author and RD has exposed yet another instance where our government is bending over for Canada's dairy industry.

To explain let me take you back to the 80s, when the first low-fat cheeses began to hit the market.

They tasted terrible didn't they?

Nowadays though they don't taste half bad. In fact in some cases, it's almost impossible to distinguish the low-fat version from the regular.

The reason low-fat cheeses taste better nowadays is that over the years the cheese making industry has found ways to improve taste while still keeping the saturated fat levels low. They've been adding milk solids and whey and other foods that affect the "mouthfeel" of cheese.

Those are good things, right? Lowering calories and saturated fat in our diets is supposed to be healthy, right? Health Canada and our government in general would want that, right?

You'd sure think so. You'd think that the Canadian Food Inspection Agency (CFIA), an agency who Rosie points out's mandate is to,

would want and encourage Canadians to consume less saturated fat and calories and in so doing help protect Canadians from chronic conditions like heart disease and the number one preventable cause of death in Canada, obesity.

You'd sure think so.

But of course you'd be dead wrong.

So why would they want to do that?

Perhaps because the CFIA doesn't work for Health Canada, the CFIA works directly for the Department of Agriculture and the Department of Agriculture works directly for our farmers. You see, by limiting the whey that cheese makers are "allowed" to use they will require cheese makers to buy more liquid milk from Canada's dairy farmers.

So what does Health Canada have to say on the matter? Health Canada who as I mentioned yesterday quite literally launched the Food Guide while basically holding hands with the Secretary of State for Agriculture?

Rosie managed to contact Renee Bergeron a Happy Corporations spokesperson who had this to say,

"Based on our initial review, Health Canada considers that the proposed changes to cheese standards would not be expected to compromise the nutritional quality of cheeses and cheese products."

I wonder which corporate shill in Health Canada had the honour of signing their name to a paper that stated that raising the saturated fat content and calories in cheeses wouldn't compromise their nutritional quality.