You can stack your deck, but you can't get a new one! 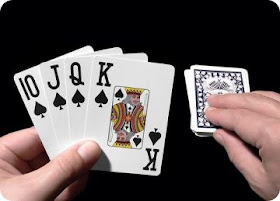 I was thrilled a few weeks ago to break a 5 minute km pace on a 4km run (roughly a 7.5mph pace, nothing particularly brag worthy), and I had to really kill myself to do it, and the distance sure wasn't all that long.

Then I came across this video that highlighted an absolutely brilliant advertisement from ASICS.

Their challenge? Race against Olympic caliber marathoner Ryan Hall for just 60ft and see if you can keep up.

There are only a few Ryan Hall's in the world. Don't try to be one of them. Instead, as I've been yammering on about for some time, set your goal to do your best and never be discouraged if it's not as good as someone else's. Sure So-And-So might be losing weight faster than you, but really, why does it matter?

We've all got a deck of cards in life. We can stack them, but we can't swap them out.

Stack your deck as best you can, but don't ever be discouraged if your deck isn't as stacked as someone else - that's just real life.

If you want to see Ryan Hall run, and the brilliant ASICS ad, watch the video below (email subscribers, head to the blog to watch).